Process application engineers often encounter a variety of complex challenges related to deposition by spin coating, as many variables affect the quality of the spin-applied coating. These variables have critical effects on the overall coating uniformity, coating thickness, and subsequent device yield. Some of the more influential variables that must be controlled precisely are spin speed, acceleration, and airflow/fume exhaust.

Typical spin-coating recipes involve dispensing a small puddle of fluid resin onto the center of a round substrate. This material spreads due to the radial centripetal acceleration force and evenly flows across the entire surface of the substrate. Final coating thickness and coating uniformity (measured as total thickness variation) are affected by final rotational speed, acceleration, ambient airflow (turbulence), and fume exhaust. Process engineers have utilized spin-coating techniques for decades, and they produce predictable results when standard round substrates are used.

Standard round substrates feature an inherent advantage in airflow dynamics compared to other exterior shapes in that they generally feature smooth, contoured (radial) edges and cause minimal disruption to the ambient air environment. This shape produces relatively uniform evaporation rates, as the fluid moves toward the radial edge during the spreading and subsequent drying steps. The resulting edge profile effect is very consistent and can be optimized through many standard process techniques.

Not all substrates are round, however. Square and rectangular shapes are commonly processed for a wide array of applications, including semiconductor photomasks, displays, and photovoltaic (PV) solar panels. These square and rectangular substrates create unique and complicated challenges for spin-coating applications through increased air turbulence. The leading edge of a square or rectangle causes significant turbulence when it contacts the internal spin bowl atmosphere, which leads to uneven evaporation of the film resin and anomalies in both thickness and uniformity of the coated film. Common film imperfections seen on square or rectangular substrates are often referred to as “edge buildup,” “fringing,” or corner “interference bands.”

Using a recessed spin chuck elegantly solves these problems by virtually eliminating the air disruption and resulting film non-uniformity. This design emulates a round substrate and removes the effect of the leading edge of the square or rectangle, thus dissipating the normal turbulence in the spin bowl atmosphere. These chucks virtually eliminate edge interference bands (corner fringing) and are custom-designed for each specific substrate dimension. Additional advantages of this design are its ability to auto-center and to provide both lateral and vacuum grip, as well as its ability to protect the back surface of the substrate and mitigate potential contamination. 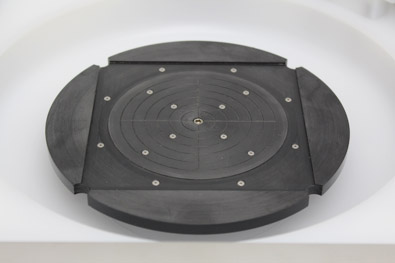 While recessed chucks have important advantages, one disadvantage is that they are magnitudes heavier and create considerably more inertia than that created by standard round substrates. This added weight has a negative impact on spin speed acceleration. Any reduction in spin speed acceleration toward the final spin velocity can have dramatic effects on the final properties of the coated film. Because the resin begins to dry during the initial part of the spin cycle, it is important to accurately and aggressively control acceleration rates. In many cases, up to 50% of the solvents in the resin will be lost to evaporation in the first few seconds. Many process engineers utilize “snap” spin recipe techniques to aggressively cast the material from the center to edge in less than 3 seconds with maximum acceleration (5,000-20,000 rpm/s), followed by a much slower (< 500 rpm) drying step.