As semiconductor devices evolve, smaller and smaller feature sizes are required to achieve the performance desired by the consumer. Smaller features give rise to lower power consumption for mobile devices, less expensive devices due to the ability to manufacture more chips per wafer, and faster overall speed.

Smaller feature sizes also lead to higher aspect ratios in the photoresist, which cause pattern collapse and result in smaller processing windows. Therefore, photoresists have become thinner to offer higher resolution and to overcome pattern collapse. Typical photoresist thicknesses for today’s cutting-edge immersion processing are in the range of 60 nm to 100 nm, whereas typical photoresist thicknesses just a few years ago were about 150 nm. The trade-off for using thinner photoresists is a smaller etch budget for pattern transfer into the substrate. For this reason, multilayer patterning is needed.

Current multilayer patterning uses a thin photoresist with a thin inorganic or organometallic etch barrier layer (a hardmask, HM) that is deposited by either chemical vapor deposition (CVD) or spin-coating processes over the top of a thicker layer that is high in carbon content (a carbon hardmask, CHM). Some examples of CVD hardmask layers include SiON, SiN, and TiN. Organosilicates are one example of a spin-on hardmask. An example of a carbon hardmask applied by CVD is alpha-carbon. Spin-on carbon (SOC) hardmask layers consist of organic polymer solutions that are high in carbon content by design.

High carbon content in the carbon hardmask layer is important because carbon etches slowly in the plasma gases typically used to etch into inorganic substrates such as silicon, polysilicon, SiO2, and low-k dielectrics. 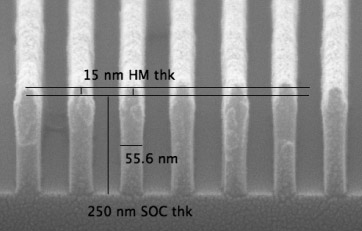 Multi-layer: A better solution in manufacturing