DSA: How far we've come and how much farther is left to go

To the average consumer, the path of new technology looks pretty linear. A cool new concept emerges, scientists figure out how to manufacture it, and pretty soon consumers can find it in a product.

But people who work in technology know that’s hardly ever the case. 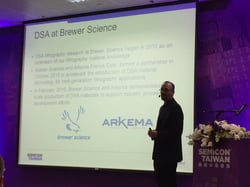 He discussed the current state of directed self-assembly and why now, more than ever, we have reason to get excited about it.

Where is DSA now

The Gartner Hype Scale is a graph that helps us understand the maturity and visibility of emerging technologies. Since directed-self assembly’s first introduction to the ITRS Roadmap over 10 years ago, it has been on quite a ride. We estimate that around 2010, when companies like ours began to really look into DSA, is about when it climbed the peak of inflated expectations.

Now, unfortunately, it seems to sit in the trough of disillusionment.

After this year’s SPIE Advanced Lithography Symposium, it seemed as though progress and enthusiasm were at a standstill. The industry has realized it’s a bit more difficult to implement than the peak of inflated expectations had us believe. And while it seems like it could fizzle out, we believe the real work is about to begin.

Where DSA can take us next

Directed self-assembly on its own is helping us push feature sizes smaller than ever before. But the process also looks to be the key that unlocks extreme ultraviolet (EUV) lithography and might help us fulfill its potential.

EUV and multi-patterning have been on the map for almost 25 years. But around 2010, the industry hit a bit of a road block. We realized that EUV needed a lot more development than we originally anticipated. By no coincidence, it was in 2010 that many semiconductor and nanotech companies (including Brewer Science) started doubling down on DSA as a possible bridge.

Five years after we started (with a little help from the amazing team at Arkema), we’re able to show that not only can DSA help us unlock the power of EUV, but it can also help us stabilize the process and make it more cost effective.

Because of the extremely high development costs of EUV, the relatively few companies really working on it are doing so in isolated environments. And while progress isn’t exactly moving at the speed of light, this could be a codifying moment in semiconductor manufacturing.

DSA’s readiness level may intersect with the market within two years, and in the meantime we’ve already seen significant orders of magnitude of progress. Additionally, Arkema’s BCP blends are helping us reduce defect levels, improve consistency and make the process more customizable.

These advances will facilitate brand-new platforms on which the next generation of technology will be built. And they’re happening right here at Brewer Science.

Creating the future: The next generation of directed self-assembly