The history of wearable electronics

Wearable devices are all the rage right now, from FitBit products and the Apple Watch to the ever-evolving and highly anticipated Google Glass. But the idea and creation of wearable electronics occurred long before the cell phone or even the desktop computer. Brewer Science creates materials used in the sensors and MEMS devices that enable wireless device communication for wearable electronics. Wearable devices make it possible to integrate intelligent connectivity, and interest has been growing for more than 50 years.

The 1960s and ‘70s
The first wearable was made with ill intentions as Edward Thorp and Claude Shannon created a wearable computer to help the devious pair cheat at roulette. The device worked, giving the two a 44 percent edge while playing. The goal was similar for Keith Taft in 1972 when he invented “George”  – a wearable computer he placed in his shoe and operated with his big toes to help count cards when playing blackjack. Eventually the casinos caught on to these bold actions, and the use of computer devices were outlawed from tables.

The 1980s
The movie The Terminator motivated countless developers to create real-life computer displays to wear over your eyes, similar to the current Google Glass format, but none came to fruition. In 1987, digital hearing aids were introduced but were extremely underwhelming as the battery life was subpar and the devices were too bulky.

The 1990s
In July 1996, the Defense Advanced Research Project Agency (DARPA) held a forward-thinking “Wearables in 2005” workshop where industry leaders gathered to present studies, new hardware, and new technologies and to discuss where they envisioned wearables heading. The main focus of this workshop revolved around computerized clothing and body-mounted cameras. Unfortunately, the wearables market was briefly overshadowed by the introduction and fast evolution of the mobile phone.

The 2000s
The mass production of microchips, starting in the early 1990s and throughout the 2000s, helped skyrocket the wearable device market. The 2000s introduced us to the first Bluetooth headset, the first fully digital pacemaker, fitness trackers such Jawbone and FitBit, and collaboration between Nike and Apple allowing users to track their movements and gauge improvements through statistics online.

The 2010s
2014 was labeled “The Year of the Wearable” by many tech publications. So far, the 2010s have brought us the first generations of the Apple Watch and Google Glass. Although neither has taken off, countless developers are at the drawing board creating applications to turn these devices into technology we can’t live without.

At Brewer Science, we’re excited to help the wearable electronics market grow as we work on projects with manufacturers to make devices smaller, extend battery life, and support new and exciting applications. If you’re interested in learning more about how we can help your business grow within the Internet of Things, contact us online or by phone at 573-364-0300. 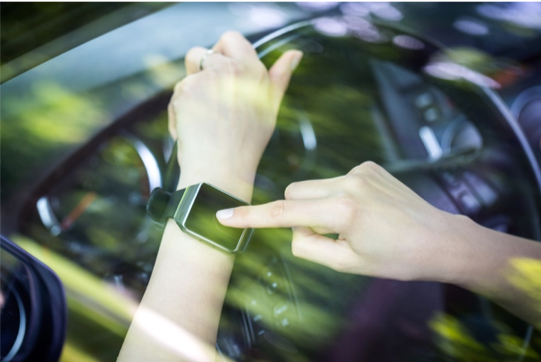